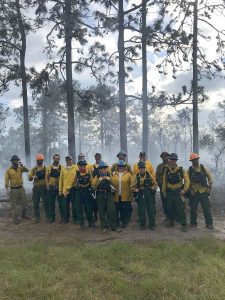 Central Florida is a region often characterized by suburban sprawl, tourism, and a rapidly growing population. Yet adjacent to these areas of dense human development exists a blend of ecosystems that continues to support a variety of wildlife. Nestled at the heart of all this lies the University of Central Florida, a campus that boasts almost 800 acres of natural lands. It’s UCF’s urban forestry team that’s responsible for the maintenance of these lands, and on February 5th they received recognition from the Florida Urban Forestry Council for their commitment to conservation.
The Urban Forestry Program at UCF was first established in 2010 as a means of responding to storm damage. Since then, the five-person team has overseen the planting, pruning, and removal of UCF’s campus trees—all 7,756 of them. Using Arbor Pro, a GIS mapping software program, the team is able to keep a tree inventory, place work orders, and manage fertilizing needs using a web-based interface. UCF is the first university to ever receive this recognition from the council.
John Guziejka-a biologist and arborist on the UCF team-believes that as the campus population continues to grow, the need for a robust urban forestry program is more important than ever.
“These are detached ecosystems in a metropolitan area.” Guziejka said. “Maintaining tree canopies out here is essential; they give us so much”
According to Guziejka, trees offer a variety of services. They provide wildlife habitats, aesthetic enhancements, water filtration, recreational opportunities, and are even linked to improved mental health. Trees also release oxygen and store atmospheric carbon dioxide through a process known as carbon sequestration. In 2017, the trees at UCF sequestered about 97 tons of carbon, which not only helps to mitigate climate change, but also supports UCF’s climate action goal to be carbon neutral by 2050.
One of the most notable aspects of UCF’s urban forestry program is its prescribed burning initiative. These prescribed burns occur frequently on campus, and have proven to be beneficial to the native plant communities.
“These are low nutrient systems, so burning them acts as sort of like a fertilizer” Guziejka said. “These prescribed burns also open up mid-story vegetation, remove invasive species that aren’t accustomed to fire, and reduce the risk of future wildfires through fuel reduction”.
Since starting prescribed burns on campus several years ago, the UCF natural lands have made impressive strides in biodiversity. These lands now provide habitats to gopher tortoises, hawks, osprey, deer, songbirds, and even a black bear. Student engagement is also a priority for the urban forestry team, and they frequently partner with the Arboretum. Together, they plan to increase tree signage, establish trails, and even strategically place trees that allow students to better hang hammocks.
“I encourage students to look up” Guziejka said. “We should take the time to appreciate our access to these natural lands”.
To learn more about the Urban Forestry team visit UCF Landscape and Natural Resources

ArborPro has completed a tree inventory and tree management plan for the city of Wentzville, MO. A tree inventory is the first step in understanding the current state of their Urban Forest and creates a framework for a tree management plan. The tree inventory included trees and stumps within select parks, public facilities and along public street rights-of-way (ROW). A total of 2,902 sites were recorded during the inventory and included 2,890 trees and 12 stumps. ArborPro found a total of 117 distinct species of trees within the rights-of-way in Wentzville. The trees in the city of Wentzville provide approximately $138,454.00 in annual environmental benefits and an energy savings of $9,504.00 yearly. The Stormwater Interception is valued at $30,462 a year and Carbon Sequestration valued at $2,077.00 a year. The improved property value associated with the aesthetics of the trees in Wentzville is valued at $92,884.00.

ArborPro utilized the information from the tree inventory to create a five-year tree management plan for the city of Wentzville. This tree management plan included Priority 1 Removals, Priority 1 Pruning and established Routine Pruning cycles for the first year of the plan. Lower priorities and routine pruning were scheduled throughout the remainder of the five-year tree management plan. ArborPro created annual budgets for each year of the maintenance plan. A portion of the funding for this project was made available by the Missouri Department of Conservation Tree Resources, Improvement and Maintenance (TRIM) Program.

We are here to answer any question you may have.